A Guide to GPU Server- How can businesses leverage GPU servers? 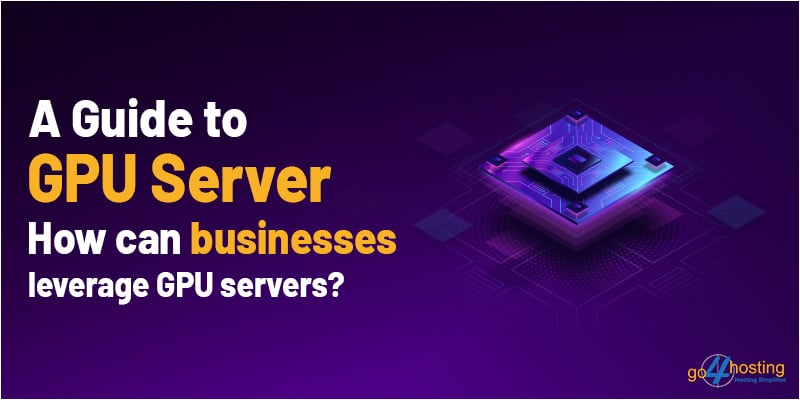 When most people think of processors, they simply think of the Central Processing Units that’s been put on the server. However, CPUs are a thing of the past. Today, organizations are choosing better and more powerful servers, known as GPU servers.

This post will discuss what GPU servers do and how businesses can leverage GPU servers.

So, let’s get started…

What is a Graphics Processing Unit?

As the name implies, GPU servers come with graphics cards and are specifically built to harness this massive amount of raw processing power.

The CPU can delegate specific tasks to the GPUs through the use of an offloading process, hence enhancing performance. More properly, a GPU is a coprocessor that assists the CPU.

GPU is necessary mainly for playing high-graphics games such as Asphalt 8, Player Unknown’s Battlegrounds (PUBG), Need for Speed – Most Wanted, and others. Aside from that, GPU also benefits people involved in intensive photoshop designing, 3D art designing, or video editing.

The ability to connect several monitors at the same time is yet another essential application of the GPU. CPU provides only a limited number of HDMI or DVI ports, while in today’s multimedia world, video editors, gamers, and YouTube creators need multiple displays. On the other hand, GPU servers can provide you with multiple numbers of ports for your multi-screen experience.

Aside from that, when it comes to conducting high-level machine learning projects, GPU technology is the most efficient option for achieving the greatest possible performance.

How are CPUs different from GPUs?

The primary distinction between CPU and GPU is their intended use; the CPU, as previously said, is primarily intended for general calculation, whereas the GPU is intended for visual and video rendering. In simple words, a GPU is a coprocessor that assists the CPU.

General Processing Units have gained a lot of traction in the past few years because of their vast benefits. Those who’re into video editing, YouTubers, etc., very well know that processing graphical images and video needs much too many steps, such as pre-rendering the files, creating them, compressing them, storing them, and altering them. Handling all these functions is not easy for a CPU; you need to have a more robust server, which is GPU.

The GPU can perform these compute-intensive tasks independently of the CPU, allowing the CPU to work more efficiently.

Microsoft Office, Word, Chrome, gaming, and all other applications nowadays require extra CPU resources to run their daily operations. You need to do software upgrades to improve the user experience that is dependent on GPU or CPU use.

How can businesses leverage GPU servers?

As said earlier, CPUs are for general-purpose computing. They’re well suited for operating a diverse range of programs, such as an email server, a web client, or a word processing application.

Graphics Processing Units (GPUs) are developed in a different way than CPUs. They’re specifically designed for generating realistic 3D graphics at high speeds. Moreover, their configuration allows the execution of floating-point number arithmetic quickly and accurately. GPUs normally have slower core speeds than CPUs, but they can have hundreds of cores running in parallel, allowing them to do complex calculations faster.

As a result, you can perform certain mathematical operations more quickly on a GPU than they can on a CPU. According to experts, an Nvidia GeForce 1070 graphics card is approximately 16 times faster than an Intel Core i7-7500U processor.

Furthermore, in addition to being faster, the relative performance consumes less energy, which reduces both heat and power consumption.

Take a look at the benefits of GPU Servers…

The first and most important benefit of GPUs is their desktop and virtual machine performance. Businesses can now use cheap GPU dedicated servers to boost their data processing power.

Processing images and videos, 3D modeling and rendering, segmentation, and facial recognition are just a few tasks requiring GPU acceleration today. And as the organization’s data and user base grow, so does the strain on the system to deliver outcomes.

GPUs can help here by bringing in more resources when the system needs them to process and give a seamless user experience.

Videos are now prevalent among consumers due to constant improvement. Videos demand more resources from the backend to deliver live. Technological advancements have enabled 3D, 4D, and even 5D infrastructure changes.

With cheap GPU servers, companies may access advanced technology at the most competitive prices and can have a competitive edge over others.

Gaming is becoming a huge industry in many nations, especially among the youth. Increasingly complicated resource requirements put the system under strain, only current GPU solutions can cope. That’s the reason businesses are increasingly using virtual GPU cloud servers to boost system resources.

So, this is how you can leverage GPU servers and enjoy the vast benefits that this server offers. With a cheap dedicated server with GPU, you can improve the current IT architecture to meet resource demands. It will allow you to process large amounts of data without significantly increasing infrastructure expenses.

Whether you’re looking for the cheapest GPU dedicated server or cloud graphic processing units, we can help you.

We at go4hosting offer both cloud and private GPUs, which you can configure to operate with a dedicated server to achieve desired performance. We can help you with the most cost-effective GPU solutions for cloud applications ideal for high-memory workloads or that run on the Windows Cloud platform. You can demand customized GPU solutions to meet the needs of diverse customers. You can be the one! Contact us NOW!