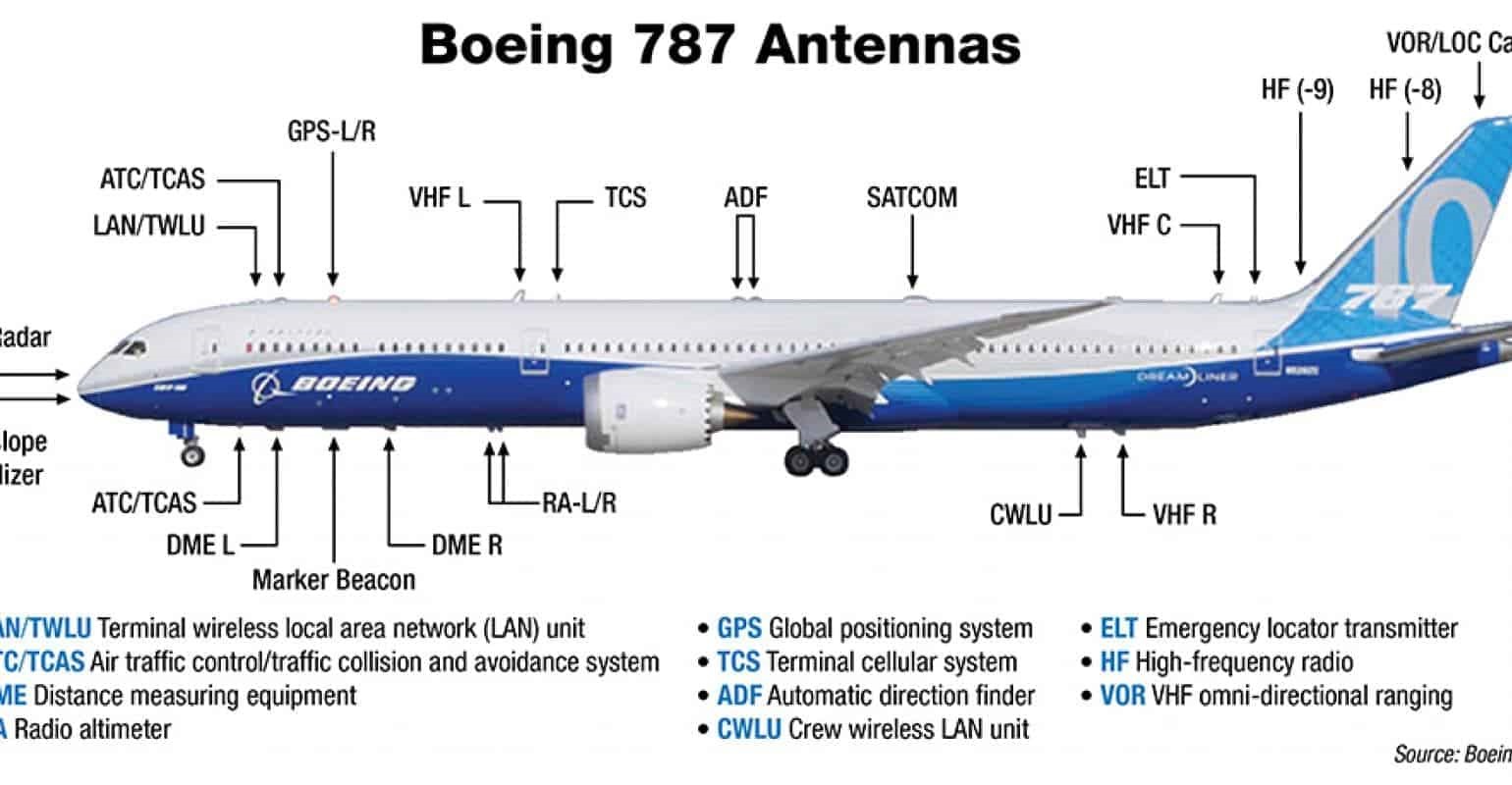 Airliners are fun to travel. A few hours of mesmerising and comfortable journey, provided there is no turbulence. If you have ever traveled in an airplane before, either for holidays or business purposes, you might have noted how some airliners offer internet while in air.

Though a majority of airplanes have no internet, some, especially long international flights, do provide Wi-Fi fast enough to reply to emails and scroll Facebook.

How in-flight internet services work is not rocket science but offers a few interesting facts while we unravel this mystery.

In-flight Wi-Fi is not only getting faster but also cheaper. Initially associated with only expensive dreamliners, affordable flagships have also started offering Wi-Fi in the flight. But how does internet 40,000 feet above earth surface work, especially when your phone shows no network and the plane’s Wi-Fi is loading your boss’s email without hassles?

How do airplanes get signals?

An aircraft has just as many antennas as the types of signals it receives and transmits during flight. Antennas are important for airliners. The last thing you would want is your communication antenna to malfunction and you landing on the wrong place. Generally, an aircraft will have two radio antennas for communication – one at the top and other at the bottom. But here we are concerned not with the radio but the internet. So, there should be an antenna to receive signals from mobile networks on land.

So, an aircraft with Wi-Fi has an antenna to connect with networks and relays the internet to all the devices aboard. Fair enough. But how come the internet is accessible when passing over the oceans, with no mobile towers for good 10,000 kms stretch.

To provide internet in the air, airplanes have access to either mobile towers or the satellite-based service. There are enough antennas in the plane to enable it to hit towers or satellites and relay contents from a dedicated server to mobile on board.

Wi-Fi on a plane works pretty much like Wi-FI at your home, office, and the café you so frequently visit. The working of these signals is easier than most people think and not witchcraft. Perhaps this could be the reason why internet services are so common in airliners these days. Nonetheless, there still are some flagships that have not included these services yet, the cause of which we shall discuss in later sections of this blog.

Air-to-ground (ATG) – communications radio work on this technique. The signals are relayed from the nearest air traffic control tower and hit the ATG antenna. The radio device transmits these signals into voice and flight directions are received in the cockpit. There are two more ATG antennas down towards the belly of the plane. These antennas pick up signals from cell towers also provide Wi-Fi band inside the aircraft. It is the slowest internet service you would come across in-flight. Speed is usually limited to 3MBPS, barely enough for checking social media feeds, but adequate to reply to emails. Such service has its own downside –

First, the internet is available only as long as the tower is within reach. So, ATG services are usually deployed for domestic flights within land.

Second, the number of users active has great impact on connection speed. We have come across people who complained that it took them minutes to load a single photo on airplane’s Wi-Fi. But, considering you are a few ten thousand feet from tallest man-made sky scraper, the service is still better than nothing at all.

The next two on our list are satellite-based services, which though provide considerable improvement over the one listed above, come packed with disadvantages of their own.

This is how rooftop TV dish stream contents to your television. The Ku-band is a satellite-based service with speed ranging between 30 to 40 MBPS. It can provide services even when the airliner is cruising over the oceans, away from the reach of nearest cell tower. A large saucer shaped antenna is placed on the top of the aircraft. Because the plane is moving, the saucer needs to be regularly adjusted to keep optimum signal strength from the satellite. The internet speed, though better than its land-based ATG counterpart, is still not still good enough to stream YouTube or Hotstar, but you can easily manage a Skype meet or Google Duo with your team.

This method relies on precision-placing the antenna – a few degrees left or right and the signal strength dips down to half. Moreover the aircraft is constantly moving, so the receiver has to be adjusted every now and then. This imposes a big challenge. Unlike home TV dish stationed on a stationary surface, the saucer needs to be somewhat repositioned multiple times during a flight.

Ka bands are not near as common as their Ku counterparts. Most airliners operate Ku band Wi-Fi and some operate none at all. Ka-band is way expensive that any of the preceding satellite-based services. It is also the fastest Wi-Fi communication in existence today, offering speed as high as 70 MBPS. There are not many Ka-band satellites available for commercial services. Currently only offered in the US, this band may soon replace all the other internet service in airliners.

The connection with Ka-band is as fast as any high-speed internet connection in real life. It can seamlessly stream Netflix, play YouTube, steam online games or even download email attachments in an instant. Ka-band, as of now, is only reserved for military purposes and it is only a matter of time before this technology is unveiled for commercial purpose.

Changes That Planes Undergo To Provide You a Working Internet Connection

Internet inside an airplane is not a matter of a couple antennas, there is a number of equipments involved. Several black boxes are lined up above the windows. These black boxes are not flight recorders but wireless access points, commonly called WAPs.

Internet on-board is not as seamless as on land and you might expect, there are limitations on what you can access and what you cannot – typically because the connection is not fast enough. Also, there is no load balancer to effectively send packets off to connected devices. The WAP is kept auto-throttled. Means, the data is evenly distributed among all the users.

Technically, lesser the number of users, the faster the pages load.

Different WAP services will also have different limitations based on their equipments. For example, the ATG antenna cannot be placed at random on the aircraft’s periphery. It is very meticulously placed in such a way that it faces only front or the rear of the plane. Even the Ku-band antenna can connect to one satellite at a time i.e. it does not support multi-lateral communications.

When drawn off the board, these factors come into play and often result in disruptions. Even though the satellite technology is considered somewhat more reliable, there are evidences that manifest that the service is almost as prone as the ATG connection.

Flight-path also plays a critical role in ATG. Flight routes that run above cities are less likely to notice disruptions than routes that run over endless stretches of farm land.

What has kept airliners away from incorporating WAPs into their flagships?

Establishing connection with dedicated server on ground is not nearly half as much trouble as establishing the same in mid-air. Airliners run in a shoe-string budget and are regularly hit with spikes in oil prices. As per the data from last year, airliners in 2019 spent as much amount in fuel as in all the other avoidable expenditure combined.

Many flagships have invested heavily in R&D programs to hedge fuel cost. Some of the most profound techniques of saving fuel involve flying at high altitudes (40,000 ft), capping baggage weight, and reducing aircraft’s weight.

Given the number of trips an aircraft makes every week, multiplied by its life span, companies cannot afford so much as an extra kilogram of weight in their carrier. The same goes with Wi-Fi equipments –

Companies do not willingly spend even a buck extra on anything unless it has potential to return in the long run.

Additional equipments mean added weight. Over the years maintenance and fuel would have cost more than what the flagship earned from mid-air internet.

But till we see more flights with Wireless Access Points, we have no other option but to allow airliners to digital detox us.